Our modern-day paramedic services are incredible advanced, from the receiving of calls and the dispatching of help, to the aid received at the hands of well-trained crews, to the rapid transportation by ground or air to an appropriate care facility. This sophisticated system evolved over many years.

November 27, 1913, dawned with much excitement. After two years of effort by the Girls Hospital Auxiliary, Vernon finally had a new, horse-drawn ambulance.

The members of this organization, under the direction of President Madge Burnyeat, were able to fundraise $950 with support from the community for this much-needed vehicle. 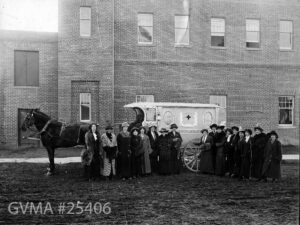 The Girls Hospital Auxiliary of Vernon standing beside the ambulance they were able to purchase for the Vernon Jubilee Hospital in 1913.

“It will be of inestimable value in handling critical cases for the hospital,” reported the Vernon News.

The invention of the first modern ambulance is credited to Baron Dominique-Jean Larrey, a surgeon in Napolean’s imperial army, who designed a lightweight, horse-drawn wagon that could move rapidly across the battlefield in the late 1700s.

Here’s an interesting sidebar—the highest medical honour that can be bestowed by NATO is known as the Dominique-Jean Larrey Award, and is giving in recognition of a significant and lasting contribution to NATO medical support or healthcare. In 2012, it was awarded to Canada for the establishment and command of a multi-national medical unit at Kandahar Airfield, Afghanistan, between 2006 and 2009.

Despite the passing of around 130 years since Larrey’s invention, the ambulance purchased by the Girls Hospital Auxiliary was remarkably similar in function to those used by the Napoleonic army. The horse-drawn wagon had room for a driver or two in the front, and plenty of cabin space for the patients and their attendants.

The Girls’ Hospital Auxiliary (now known as the Vernon Jubilee Hospital Auxiliary) was started in 1907. The first purpose of this organization was to sew and mend hospital linens. By 1924, the group was made up of over 320 members—but only nine of them regularly attended meetings.